There was nothing extraordinary about the Phillies in 1957.  They did have two good rookies in first baseman Ed Bouchee and pitcher Jack Sanford. Sanford won the Rookie of the Year award, and Bouchee came in second that year. It was also the year the Phils broke the color barrier, eleven years after the Dodgers and Jackie Robinson.  If you were a Phils fan back then, your choice for a star player was either ace pitcher Robin Roberts…..or the speedy hitting machine, centerfielder…Richie Ashburn. I was an Ashburn fan.  My first game at Connie Mack Stadium to see the ” Fightin’s ” live was July 20, 1957.  Before the game started my Dad, with my brothers and me in tow, got us down near the Phils dugout.  With an autograph book, that I had bought at Woolworth’s the day before, I got my first autograph…….Richie Ashburn.  The whole experience lasted all of about a minute,  but to a young fan it was an event that would impact my life some 34 years later.  As it turns out, it also impacted the life of my hero Richie Ashburn.    I’ve included a picture of that first meeting between me and Richie back in 1957.  I’ll be posting more stories, photos and more soon…………………..jim donahue 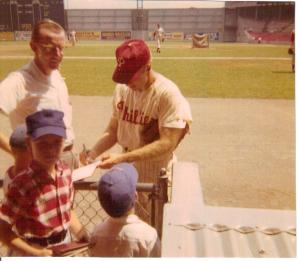 That's me facing the camera and Whitey 1957

This entry was posted in Uncategorized. Bookmark the permalink.